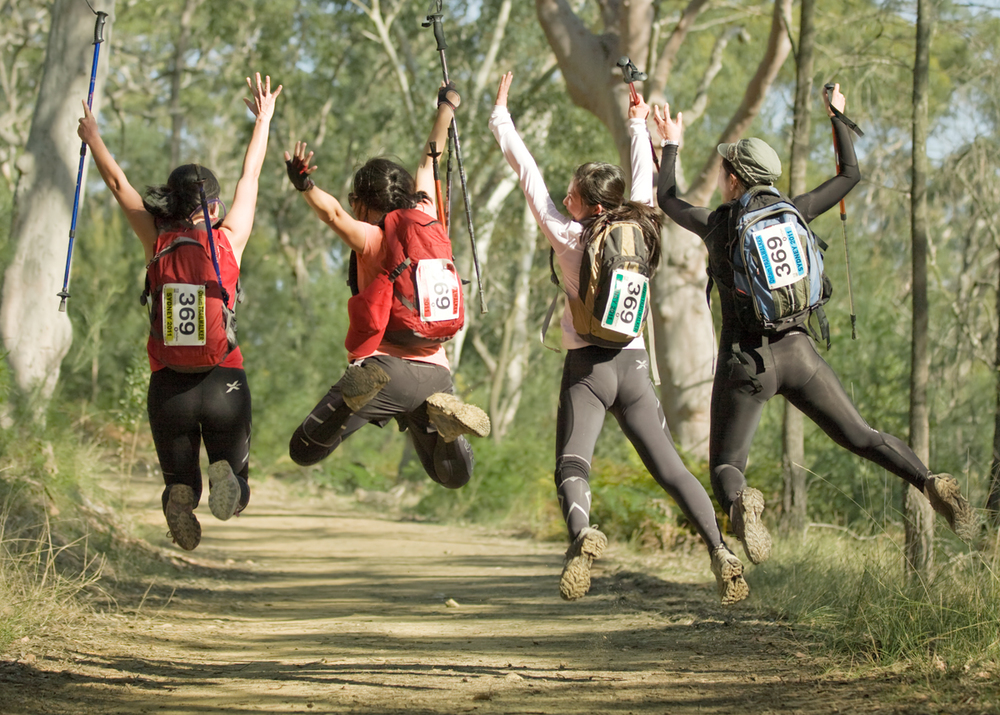 It’s true, you can get through it. But what if you also had something left in the tank on finishing, were blister-free and weren’t hobbling around for the following week like and 80 year old?

What if you took the easy path? If the easy path is being fully prepared Physically, mentally, emotionally, nutritionally & therapeutically, wouldn’t that make for a more enjoyable experience on race day? Let’s take a look at some of the mistakes I learned during my Endurance Training Experiences with Coastrek & Oxfam Trailwalker.

I am not a seasoned endurance racer, nor am I an athlete. But I have been in teams for Oxfam Trailwalker & Coastrek where things have gone wrong and I wished I had known this information before I entered into them.

As a support crew member, I saw team mates go through extreme pain and suffering because they didn’t employ such tactics. It’s not that they weren’t told, more that they thought they knew best, they had their own plans and they weren’t basing that on any research or evidence, more just what they wanted to do.

This team member was in Coastrek. She didn’t make it to many group trainings which were happening every week, same time same day. She was doing her own fitness program at the gym when she could make it. She was our slowest walker. In training the team had agreed to keep her pace within our group, so as to not leave her behind which would be more demoralising.

On race day, against advice to pack light, she had the heaviest pack. At the 40km mark, her knee gave way. She had stayed silent during the previous kilometres and didn’t let the team know how she was feeling, despite being asked. She said “I don’t need help” and was going to push through the pain and injury with sheer willpower and determination to finish. Ouch!

Click here to get your FREE Support Crew Organiser

I have mentioned this before in another blogpost about the importance of Salt and Sugar in your fluids. I Look back on my Oxfam Trailwalker experience and am amazed that I did get through it. If only I had carb loaded more the couple of days before the event.

I was physically and mentally prepared. We had done 16 consecutive weeks of endurance hiking, but it was my nutrition that let me down on the day. I had easily digestible foods, but just didn’t eat frequently enough.

My glycogen stores ran out as I hit the wall sometime around 4am at St Ives in Sydney and it felt horrible. I felt depressed, it was a dark place to be and my ego was battling me every minute. “You can put an end to this, just say no more. Just stop and you can be at home, safe in bed in less than 30 mins.” I was hoping any little attempt at self-sabotage would get me out of the biggest mistake I had made in entering this dang event. Those 2 hrs the whole team was grounded (in pain and needing some shut-eye too). As I pulled myself together, I slept deeply sucking up every millisecond of sleep I could and when I opened my eyes, things were a blur, moved in slow motion and were interrupted by episodic tears. I would not wish that on ANYONE!

Mistake Number 3: Bottling it up

I think working with a team, full disclosure helps you all get a realistic perspective on how your team will go on race day. Communication is absolutely key. Communication fosters trust and affinity, team morale, better support and more realistic expectations.

Team dynamics can be one of the things that is never addressed in a group event. You all like each other at your first meeting, so what’s the problem?

Well endurance trailwalking means you have a lot of time to get to know someone, their highs and lows and especially how they cope under stress. It’s the equivalent of house sharing – you definitely get to know the real person. Warts and all.

Strip away the pleasantries, when you’re injured, in pain from blisters or breaking down because you’ve hit the wall, chucking your guts up from eating the wrong food, or peeing in the bushes you better be ok about doing it in front of your team. It all comes out, warts and all on race day.

We had a team member in Oxfam Trailwalker that seemed to take the endurance training in his stride, no problems. He was one of our faster walkers and never complained, was the stats and numbers man who recorded our every kilometre on his smart phone. He had rigid expectations of completing in less than 25 hrs. We took 35.

We would assess team comfort on a scale of 1-10 with 10 feeling great. But he wouldn’t admit pain, nor weakness the whole event. He got negative and couldn’t keep the comments to himself, which started to wear down the rest of the team’s morale. We weren’t meeting our expected time targets and we were slowing down, the trail was gridlocked with the hundreds of other teams walking single file in places and queueing at bottlenecks. It really shook up the team dynamics with him being isolated from the group for self-preservation of the others.

By the finish line, he was very emotional from exhaustion and fatigue.

How this bottling up could have been avoided:

Click here to get your FREE Support Crew Organiser

Mistake Number 4: There is no “I” in Team

When I was support crew for a friend’s group, they had a team member who again wouldn’t show up to regular group endurance training sessions. It cheesy, but its true if you say “A Team that trains together, stays together.” This team member was too busy to come, had double booked herself, was doing pilates instead or doing her own mysterious training in private and other excuses.

Some endurance events are team events, yet team work is something that is assumed and not practiced in training. This baffles me! If you have no trust or affinity in your team mates, how can this possibly work? As mentioned in Point 1 and 3, the high pressure situation many newbies don’t realise they’re signing up for absolutely rears its ugly head on race day.

This team member didn’t foster trust or be part of the group spirit and was shocked and put out when the team dumped her from the group. The three members left who were prepared to put in the hours of training plus the individual physical fitness training weren’t prepared to risk their whole team on someone who was not committed. It sounds harsh, but it’s not just about finding anyone to be part of your team, it’s about finding the right people. This means, similar current fitness, same commitment levels to training, self initiated to do individual training, open to ideas and discussing issues that concern the group.

I have to make an honourable mention and big thankyou to Toby Cogley for his advice over the years in preparing for Oxfam Trailwalker and Coastrek. His words of wisdom and experience speak volumes to a novice like myself. Toby has completed Oxfam Trailwalker multiple times often running the event in around 12 hours, with one of his teams coming first in the Sydney event before. Toby also is a regular in similar endurance events and is an exercise addict generally. He is extremely generous in sharing his wisdom, time and effort to help others succeed in such events. Thankyou Toby for your inspirational lessons and advice. You have a way with words.

If you wish to prepare yourself and your team for endurance events, consider including some Natural Therapies as apart of your training plan. At FWC we offer Osteopathy, Massage & Acupuncture to help manage your sports injuries and muscle conditioning for race day. You can book online or contact us on 9938 1090 for your preparations.

Check out our other posts on Endurance Training & Prep:

Endurance Racing: Why Physical Training is Not Enough

Discover the Edge to a Full Endurance Recovery

Endurance Training: Why Winging it Fails and Preparation Succeeds